For a couple of years now we’ve been evangelizing the natural link between out of home advertising and mobile search/devices.  And now the numbers are in to back that up.

One of the long standing pillars on the effectiveness of out of home has been the fact that consumers spend 70% of their waking hours outside the home. Now that so many of them are carrying smartphones it means they are spending that time walking around with a computer—and a direct, immediate link to the advertiser—in their hand.

In October of 2015 Google officially announced that more Google searches were taking place on mobile devices than on desktop.  This shift to mobile indicates a fundamental change in how we interact with computing.  It also indicates an important change in when, and more importantly where, we are searching for information.

But despite all this growth in mobile search, the last couple of years have been challenging for digital advertising.  Numerous studies have been released with significant findings such as:

A study released at the end of 2015 calculated that a new botnet called Xindi could cost advertisers as much as 3 billion dollars in fraudulent advertising by the end of 2016.

Coincidentally, the OAAA (Outdoor Advertising Association of America) was conducting an experiment around the same time “meant to demonstrate the role that out of home (OOH) advertising can play in driving digital engagement” while “exploring the interactions between the real world and digital media.”

Advertising in the REAL world:

This groundbreaking study called “Feel the Real” was aimed at probably the most jaded audience possible – the advertising community itself.  The core message of the campaign “This Ad Is Real”, was clear, simple, and direct, and provided a knowing nod to the challenges presented by digital advertising. It directed traffic to the campaign’s website http://feelthereal.org/ . Variations on the core message tapped into local landmarks, the “real” nature of physical spaces like buses and transit shelters, and even specific influential agency personnel. 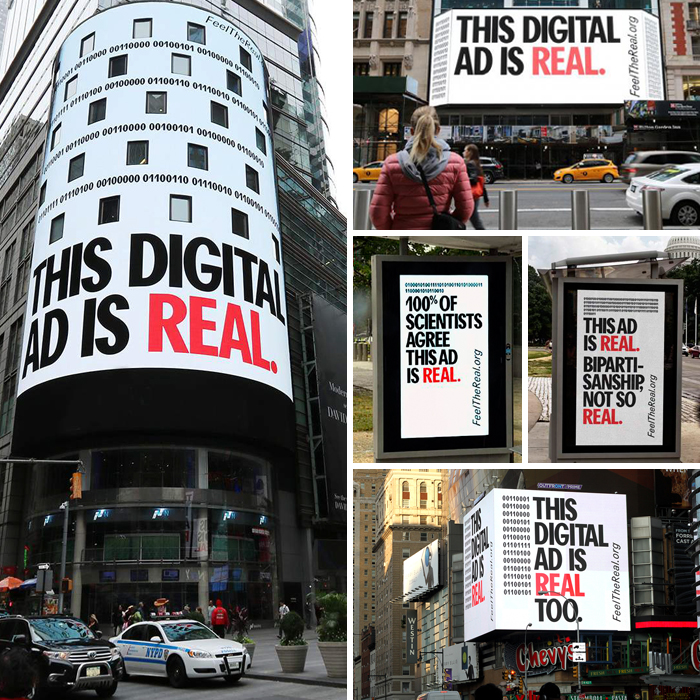 When they arrived at the site, users went through a multi-stage test to verify that they were real people, and went on to be informed about the capabilities of OOH to drive digital traffic.

The campaign results speak for themselves:

95% of visitors were verified as human

74% of visitors to the campaign’s site were from mobile devices, showing a direct connection between OOH and mobile activity

The OOH industry was having a good year through the first three quarters of 2015 with an average 4.4% growth over the previous year. Then the Feel the Real campaign took place. During the run the growth rate jumped to 6.6%.  This incremental increase in sales may not seem huge at first glance, but it amounted to over $23 million in additional sales from a relatively short campaign.

Not only did the campaign reach its intended audience (media buyers), and drive traffic to the site, it also helped increase awareness and sales.  If OOH can have such a significant impact on the behavior of such a specific audience—who are among the most skeptical around—imagine what it can do for more receptive consumers.

A recent Nielsen study showed that 33% of consumers have searched for an advertiser on their mobile device after seeing an OOH ad (Nielsen, Out of Home Study, 2016). With numbers as compelling as these it’s clear that advertisers need to consider OOH as an essential part of their media plans.

As Jim Spaeth, Chief Product Officer for research group Reality Mine noted in a recent article, ”OOH is often the first step on the path to purchase… (and) brands can secure shopper engagement with an effective hand-off from OOH to mobile… a key success strategy for brands and retailers… “

It’s clear that OOH & mobile are primed to become integral partners in reaching consumers outside the home, and driving search and engagement via their mobile devices. Advertisers are clearly spending significant resources optimizing their digital strategy, placement, creative, social media content, etc.  The question then is, are they spending the same amount of time optimizing the out of home plan?

Out of home has an existing footprint of various media that can intersect with audiences in a highly targeted—and very cost effective—way. Connections to consumers can be created with greater efficiency when OOH and digital/mobile strategies are combined. If out of home media can be such an effective driver for mobile and digital shouldn’t it be just as front of mind as the digital plan?

Contact us to learn more about how Out of Home can integrate, elevate and enhance your digital/mobile strategies.

Director of Marketing and Digital StrategiesEMC Outdoor
Matt is crazy about outdoor advertising, design & technology, electric bass guitars, chocolate covered pretzels and scrapple. He has been working in the out of home industry for 20 years, is Co-Chair of the Geopath Futures Council.