It’s January, it’s cloudy and cold and you would like nothing more than to get away to a sunny beach in Mexico. That’s just what AeroMexico is counting on as it reaches out to audiences across the U.S. 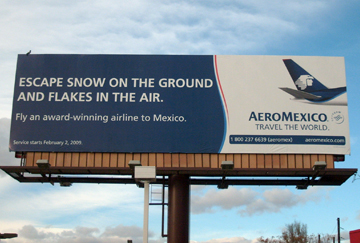 With this campaign running nationwide in eight major markets (and growing) it’s a great example of choosing the best fit media for each individual city—what works best in Chicago might not be the best choice for Seattle.

The out of home advertising campaign is using a variety of media including: Airport, Billboards, Posters, Bus Panels, Truckside and Mall Dioramas. It’s also using a number of different creative executions to help keep the message fresh, and to tailor the content to the markets. In addition to the traditional media, AeroMexico is using Truckside advertising as a way to augment its media mix. Truckside is growing in popularity as an effective way to supplement traditional media and fill the gaps in a market.

Contact us to learn more about how EMC can simplify your outdoor advertising needs.