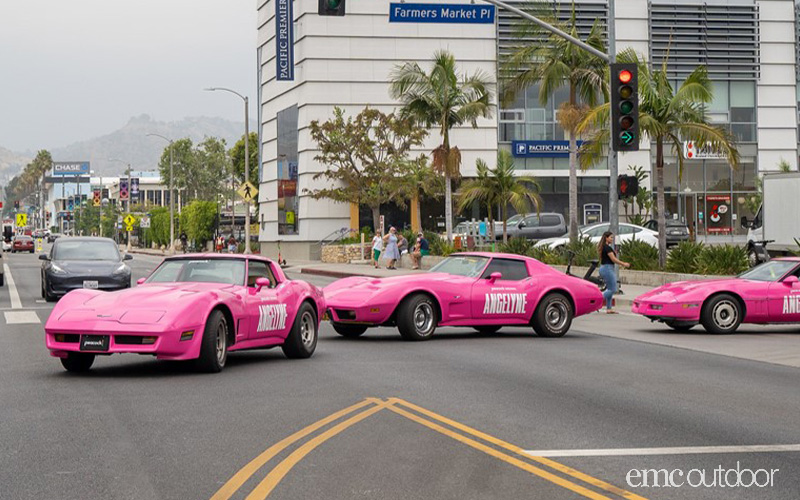 Since 1983, decades after plastering Hollywood with mysterious billboards bearing her name and Barbie-esque silhouette, the self-made urban legend can still be found zipping through the streets in her signature Pink Corvette.  Angelyne remains a hyper-local symbol of a Hollywood dream famous for being famous, the original influencer. Our most recent Out of Home activation for Peacock utilized experiential media to bring their new series, Angelyne, to life in the real world and build brand awareness.

Peacock activated its campaign from May 10th – 21st along various high-traffic areas around Hollywood, including Pink’s Hotdogs on La Brea & Melrose, Denny’s on Sunset, Los Felix Coffee Bean, Sunset Loop, Hollywood Blvd, and Santa Monica Blvd. Many of which were also frequented by Angelnye as they were her favorite. Peacock also paired their experiential activation with a traditional billboard to further amplify its brand awareness. These locations, media formats, and routes were strategically planned to reach high-traffic areas and maximize exposure.

Peacock’s activation gained vast attention locally. With many photo opportunities available, pedestrians and vehicles passing by snapped photos of these four hot pink corvettes with Angelyne printed in bold on the sides of the corvettes.  This Out of Home execution boosted awareness of the show Angelyne to reach new viewers before the premiere. The primary target audience was individuals 18+.

On May 10th, the premiere night of Angelyne. One of the corvettes was outfitted with a hot pink neon light backdrop and made available for photo opportunities with the cast, including Emmy Rossum, who plays Angelyne.

With the campaign’s conclusion, the hot pink corvettes traveled over 1,080 miles throughout Hollywood. With various stops throughout the planned routes, photo opportunities drove this experiential activation online, further amplifying the reach for Peacock’s new show. How are you connecting with your audience with your marketing initiatives? Let us know what you’re working on and how we can make your next Out of Home activation a success.